Since the dawn of time, Georgia has remained at the crossroads of Europe and Asia. It lies in the Caucasus and is the only country in the region that has access to the sea. The government of Georgia has realized the full potential of turning Georgia into a transit powerhouse.

Over the past few years, Georgia has been heavily investing in improving it’s connectivity with its neighbors, including Russia, by building higher capacity highways and repaving pothole-ridden roads. By 2032, it is expected that Georgia’s main economic artery, the E60, will be motorized. This corridor will allow for more traffic on the E60, or S1, the only artery that links west to east Georgia.

Currently, the E60 is full of heavy duty trucks while being an open access two-lane road. The road is prone to damage and often closed due to the weather. This weakens Georgia’s main economic artery as it limits the ability to exchange capital and goods. Therefore, it also raises the costs of companies to ship across the country or to other countries. This results in many shortcomings such as limiting Georgian exports and hampering the prospects for many companies here.

In turn, this makes Georgia reliant on foreign imports, which means that Georgia consistently runs a current account deficit. To be honest, Georgia has been running a trade deficit since gaining independence. Therefore, the Georgian Lari must be strong in order to make imports cheaper, otherwise there will be imported inflation triggered by rising import prices.

Plans of the Georgian Government

With this in mind, the Government of Georgia has decided to convert the E60 into a motorway which will allow for faster transits between Azerbaijan and Turkey, as well as improving the Georgian military road S3. 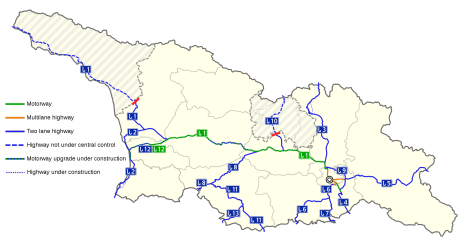 This will reduce the cost of transportation of goods and capital, therefore, reducing the likelihood of imported inflation, along with increased competitiveness of Georgian firms as costs will be reduced. Other smaller upgrades on the S12 and S2 are underway which will further reduce the costs of transportation in Georgia which will help Georgian firms and make Georgia a transit powerhouse in the Caucasus. 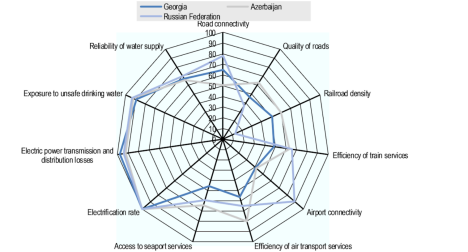 A comparison of Georgia to its neighbors.

Regardless, there is much work to be done as shown above. This can be touted as a success in increasing the potential output of Georgia, but it is hard to say this will help increase it to its full potential as Georgia still needs a lot of work in many areas of infrastructure which the Government, in its new 10 year plan, has laid out. With further improvements in these fields, it is safe to assume Georgia will increase its potential output and keep growing at a rapid pace.

Hi! My name is Shivanshu Ojha, I’m from the Himalayas but currently living in Tbilisi, Georgia. My interest in politics and economics comes from my keen interest in rationalism and analysis of human psychology. I taught myself basic economics and politics – to help me understand the human psyche. From then on, I’ve kept developing this interest and since 2018, have analyzed theories and principles of economics.