I will start with a phrase that may sound rather ridiculous to US citizens. Yes, in Russia only a very tiny fraction of people have a subscription to Netflix. In fact, many Russian people do not have a single subscription to an online-cinema. Due to some cultural backgrounds and ad technology in some distant parts of the country some people do not watch films online at all, and 93% of those who watch, use illegal resources. They are already a part of Russian culture; pretty talented people translate foreign films using jokes, irony and satire and make films only better! This is why many people hesitate to switch to official resources; they are adore foreign films that are modified a bit with Russian creativity.

But pirate websites is not the only problem Netflix faced when entering the Russian market. Low incomes, cultural backgrounds and heavy opposition joined forces.

Firstly, on average, a standard Russian has an income of about 490 dollars a month. A subscription to an online video service costs anywhere from 3 to 10 dollars, an amount that is not negligible in this case when one has to consider all the other expenses people have to cover. With inflation hitting 6% a year, and salaries not growing by the same percentage, Russians are unwilling to spend money on content, which could be accessed for free through another source.

Secondly, not all Russian people adore the films that are suggested by Netflix: there is a very significant cultural difference between Russians and Americans. The times of the Soviet Union left a very large stain on Russian mentality. People do not want to see that some people lead a happy life somewhere in another part of Earth while they don’t. They want to see movies that reflect the problems they face. That is why genres such as arthouse are very popular in Russia. Netflix does not offer such films. Also, many Russian people, due to Soviet prejudices, are pretty intolerant, and they dislike the idea of seeing people of sexual minorities on their screens.

And thirdly, Netflix has to battle with three very serious opponents: Kinopoisk, OKKO and IVI. For many years, Kinopoisk was just a website about films, where people could discuss their opinions  and put marks —  it was like IMDB – but then it partnered with Yandex, one of Russia’s largest non-governmental companies to open a service that could try to fight with Netflix for the audience. Having an abundance of money and a very talented management, Yandex straight away started buying copyrights for Russian distribution of some of the most famous films and series, such as “The God Father”, “How I Met Your Mother”, “John Wick”, etc. It even received exclusive rights to show Warner Brothers’ “Justice League: Snyder’s Cut” from the first days of its release. Tigran Hudoverdyan, Yandex’s deputy CEO, uses the same tactics as he used when he single-handedly concurred Russian Taxi Business – he attracts customers by setting very small rates at first, and then lifting them when the customers are already acquired. Yandex are basically buying rights to distribute an abundance of famous titles from the largest American film companies, and even Netflix. Many films that one can usually find on Netflix can be found on Kinopoisk in Russia instead. The only issue is that Yandex is spending too much money, even considering the fact that is is Russia’s largest IT company. The question is whether Yandex will manage to gain enough from this business to cover all of the expenses.

Competitors of Netflix in Russia

The other two large companies: IVI and OKKO are less dangerous. Even though OKKO is controlled by Russia’s second biggest company, Sberbank, it is, most definitely, not the service they consider the most important due to great revenues from its banking investment and other IT businesses. But, OKKO has a lot of rights to distribute different sportive events such as the matches of English Premier League or the fights from Bellator MMA. IVI does not have such finances as the other two companies but it has a passionate collective. Opened by a former financier, IVI became a project of his life, and he desires to fight until the end with the giants that oppose him. Even though he does not have the money that his rivals have, he invests reasonably into content that would be unique to the service (something that OKKO and Kinopoisk also do, but rely on less). Also, the management of the company has plans to have an IPO on Nasdaq to receive money for the future development of the business. In 2019, the company already had more than 100 millions of dollars of revenue a year, and this number grew by 50% a year. At that time, IVI was the most popular Russian online media service. All of these factors made IVI an interesting company to invest into, but its IPO was shattered by the COVID-19 outbreak.

To conclude, the most important factors of Netflix’s failure to win dominance in Russia were low incomes, the cultural background of Russian people and heavy opposition from local companies. In my own humble opinion, the last factor is the most significant one.

For more than a year already, the recent outbreak of the coronavirus has continuously disturbed our plans. Whereas some nations managed to normalize the situation, others have turned into a “death valley.” One of these countries is India. 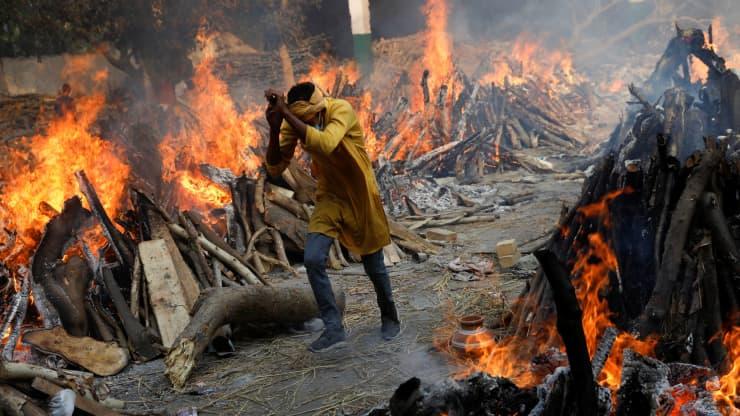 On the 26th of April alone, 316 thousand Indians tested positive for the coronavirus. However, this data cannot be fully trusted because the government is not able to supply the doctors with the required number of tests. There is also a lack of doctors to help the sick; the prices for essential medicine have sky-rocketed. Indian doctors have announced that soon there will not be enough space in hospitals anymore, and that therefore hospitals would soon no longer be able to accept new patients. The government has taken some steps to help hospitals by, for example, banning the use of liquid oxygen in non-medical purposes.

The number of daily cases for the past few days in India. The graph is taken from https://www.worldometers.info/coronavirus/country/india/.

On this day in 1915 Talaat Pasha, one of the leaders of the leading figures in the Ottoman Empire, ordered to arrest 800 members of the Armenian elite in Stambul. This was the starting point of the Armenian Genocide, one of the worst crimes against humanity in history. The aim of the Armenian Genocide was to end the “Armenian question” in the Ottoman Empire once and for all. More than 1,5 million people were killed. Men were murdered on the spot, villages were burnt down, and women and children were forced to move to the desert where they died of starvation.

On this day last year, millions of Armenians around the globe spent the day in a grave atmosphere. With shaking hands they looked at the photographs of their relatives who did not survive that nightmare. Some of them were elderly and some were not even three years old; some of them were talented artists and some were successful merchants. It did not matter who the person was, it mattered that they had Armenian blood.

On this day, the 24th of April 2021, millions of Armenians will once again reminisce these horrible events. They will do it in 2022, 2023, 2024… We shall not forget our great-grandparents, who were massacred for no reason by the blood-thirsty politicians.

In the end, I would like to ask everyone to do something. If you have an Armenian friend, an Armenian neighbor or an Armenian colleague take a look at him; just look at him for a second. If this shameful act wasn’t stopped by the Ottoman Empire’s defeat in World War I, who knows if he would be standing near you.

Elon Musk’s company has caused an abundance of debates in 2020. Everyone, from small investors to hedge-fund CEOs, struggled to tell what will happen with the company’s stock price literarily the next day. Producing a little more than half a million cars a year, the company costs more than General Motors, Ford, Honda, Toyota, Volkswagen, etc. combined. In 2020 the price of the company’s stocks has gone skyrocket growing by 800%, giving its trusting investors a good New Year’s present.

2020 was very pleasing for the company. The managers have been able to accomplish the goals set for the year; the number of cars produced and sold rose drastically compared to  2019; the revenue of the company grew by 28%, which is approximately 7 billion dollars more than last year.

This extraordinary stock price could be explained by the hype around the company and Elon Musk, many of whose projects showed mind-blowing results lately. Long-term investors believed in the company due to its innovations and governmental policies, which support eco-friendly products. Short-term investors bought the shares to follow the trend and earn fast and easy money. Also, the company is highly admired by ecologists and environmental activists, who are concerned about the rising rates of pollution. Still, many analytics suspect that it is a bubble and warn people about possible risks.

To sum up, 2020 was a great year for the leading producer of electro-cars in the world. It was taken into S&P 500 and achieved many of its goals, making Elon Musk one of the richest people in the world and later (January 2021) the richest person on Earth.

I suppose almost everyone enjoys discussing politics, when sitting at a family dinner or when gathering with friends. If you are one of these people, Machiavelli’s “The Prince” is a must-read. Written in XVI century, it still causes many debates and arguments. Some blame the author of being too radical, others posit that Machiavelli’s ideas were vital at the time and place he lived. Nevertheless, the book can surely be listed amongst classic political books, staying up-to-date for centuries already. Reading this book opened my eyes on many modern policies, and I sincerely hope that it will do so for you!