After the Lira crashed last week, protests broke out across Turkey. The crash comes after months of worsening economic problems that already caused the currency to lose more than 45 percent of its value from the start of 2021. Last week alone, the currency devalued by around 20 percent. The police have responded by detaining protestors: last Wednesday the police detained at least 70 people in districts of Istanbul who were protesting the “government’s management of the economy,” according to the New York Times.

This weekend the Biden administration announced that no American delegates would be attending the 2022 Winter Olympics in Beijing. American athletes, however, are not affected by the boycott and will be allowed to compete in the Olympics. Since the announcement, New Zealand and Australia have joined the U.S. in the diplomatic boycott.

17 days after the opening ceremony of the Tokyo Olympics, the Olympics officially ended on August 8th. The Tokyo Olympics are considered to be the most controversial Olympics in history due to the COVID-19 outbreak. On July 13th 2021, about 35% of the Japanese population were in favor of canceling the Olympics, whereas 36% thought it should take place. The question remains, how did the world react after the Olympics? Did global viewers think the short-lived Olympic Games were successful?

Change in the opinion of Japanese people

Surprisingly, a survey conducted by a newspaper called Yomiuri Shinbun found that out of 2478 people in Japan, 64% of them answered that taking part in the Olympics was a good idea. On the other hand, 28% of them said that the Olympics should not have taken place. Compared to the survey before the Olympics, a significant number of people had changed their opinion during the Olympics. In fact, before the Olympics, the highest number of COVID cases in a day was 2520 cases in January 2021. However, on July 27th, the day after the opening ceremony for the Olympics, there were 2846 cases, 300 more than the previous record. Since then, the number of cases kept increasing with a new record high of 5042 cases on August 5th. The increasing Covid cases in Japan suggest that more and more people are challenging the lockdown and becoming more in favor of in-person events. But why are so many inhabitants changing their minds? There are three main reasons; the number of people who go out, feedback from Olympic parties, and COVID cases among Olympians.

Reasons for the change in opinion

According to NHK (Japan Broadcasting Corporation), significantly more people have chosen to stay at home rather than go out or travel since the Olympics started. On July 23th, a Japanese holiday, the number of people who left their homes in Tokyo had decreased by 17%, compared to the previous four weekends. While the exact reason is unknown, many people speculate that such a reduction had occurred as the Olympics had begun, people chose to stay home to watch Olympic games all day rather than go out. Another possible reason is that Japanese people may have wanted to make a good impression on the international Olympians and visitors. Before the Olympics, many people were concerned that athletes and visitors would not be able to enjoy their stay in Tokyo because of the COVID-19 restrictions. However, despite these concerns, the Olympic athletes seemed to have enjoyed their time in Tokyo. For instance, a journalist from Singapore tweeted the excellence of ice that he bought from a convenience store, and went viral with over 28,000 likes. Also, the UK’s gymnastic team — during a video call with President Johnson — praised the Olympic Village’s facilities, such as the dining room where athletes were able to eat anything anytime for free.

The final reason is that the number of COVID cases among Olympic parties remained relatively low. According to a report by NHK, there were only 458 positive cases related to the Olympic Games which included coaches, media, contractors, etc. in the 14 days that the Games lasted. Considering the 17,000 people who traveled to Japan for the Olympics, these 458 positive cases made up a mere 0.02%. These statistics are enough to show that Japan succeeded in protecting themselves and their visitors from the virus.

In addition to those factors, many Japanese people initially disagreed with the Olympics because the mass media was demonizing the games. However, once the Olympics had begun, all TVs stopped reporting negative side-effects and started broadcasting the results of the Olympics, cheering on the athletes. The people who regularly watch the news were thus more likely to change their minds as well once the news outlets shifted their opinion. 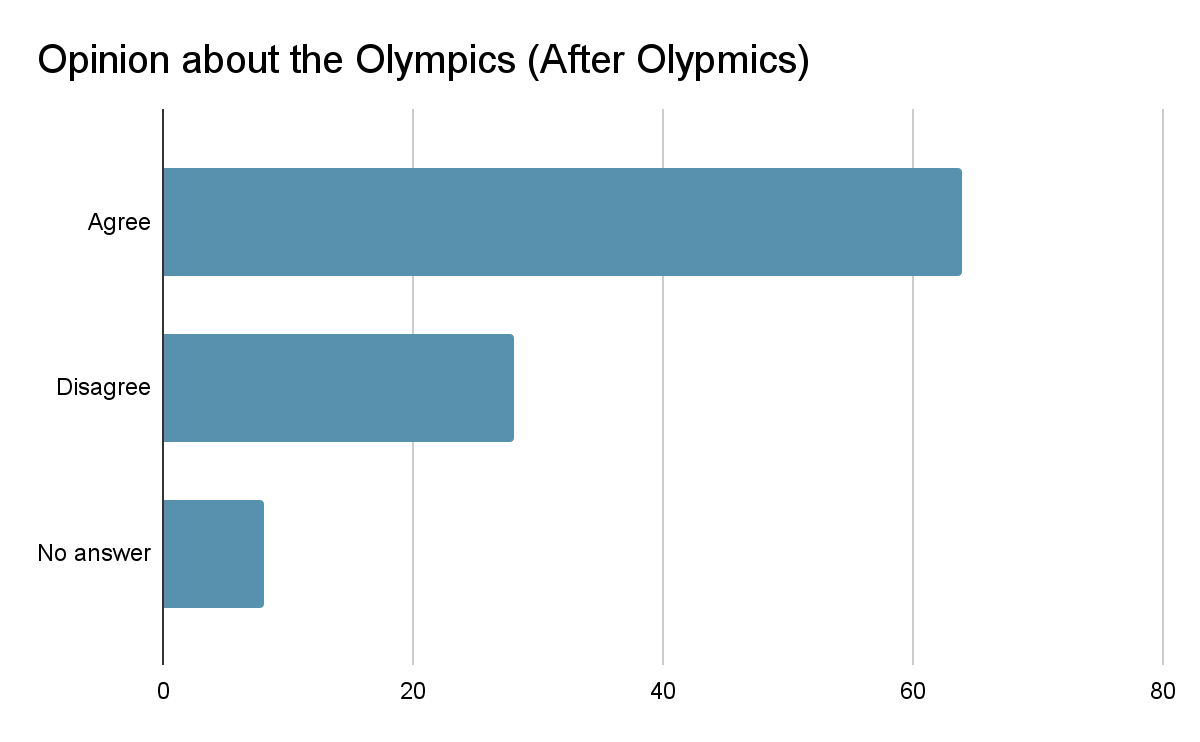 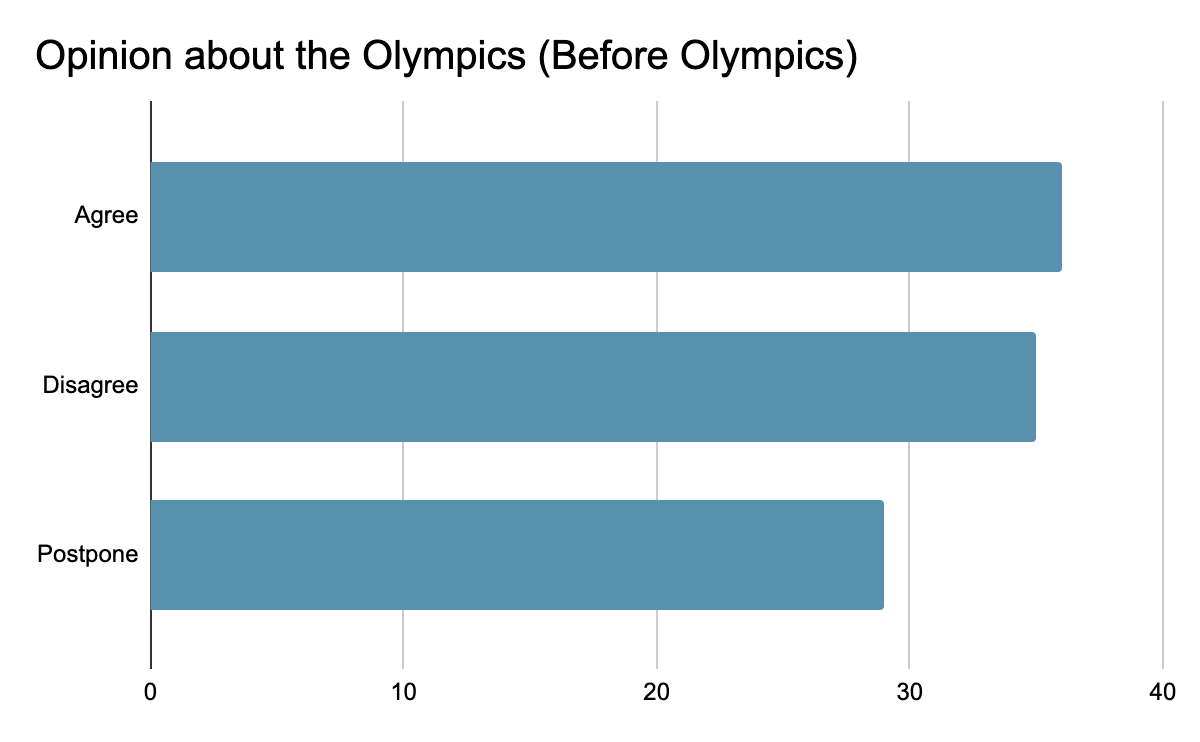 Although each person in the world has different opinions about the Olympics, no one should not forget to respect all athletes who participated in the Olympics. All of them have done their best to win gold medals in the Olympics, and they showed us how great sports are with sportsmanship through the 17 days. Some people write defamations to athletes’ social media to criticize their performances, sometimes just because the athletes won a gold medal and the athletes from the people’s countries lost. Such things are unacceptable no matter if they oppose the Olympics or not, and should be punished. Despite Japan’s population divide due to the Olympics in the beginning, it’s fair to say that the majority of the inhabitants were pleased to host the games and welcomed thousands of athletes from around the world.

The Case of the Belarusian sprinter Kristina Timanovskaya

The Belarusian sprinter Kristina Timanovskaya was first under the protection of the Japanese government after she criticized her coaches for registering her for the wrong event, according to the New York Times. Belarus tried to send her home but she was scared that she would be arrested upon her return. Timanovskaya has since stayed at the Polish embassy, hoping to seek political asylum in Poland, which has since been granted to her and her husband by Poland. Two Belarusian coaches who were apparently involved in the attempt to get her to leave Tokyo for Belarus have been expelled from the Olympic Village.

Wildfires in Turkey and Greece

Wildfires in Turkey have killed at least six people and forced tens of thousands from their homes. President Erdogan has also received criticism over his handling of what can be called Turkey’s worst wildfires in decades. Greece has also been badly affected by the wildfires, recording its hottest temperatures on record with thousands fleeing their homes. The wildfires have since also reached the island of Evia and ancient Olympia, the birthplace of the Olympic Games. The New York Times reported that local authorities and the army “dug firelines around the archaeological site” in an attempt to prevent the fires from destroying it. A thick pall of smoke also hung over Athens last Thursday, meaning that people were instructed to stay indoors until the smoke cleared.

The Japanese government and the International Olympic Committee (IOC) have officially declared that the 2020 Olympics will take place from July 23rd, 2021 onward. The decision is very controversial around the world, especially in the host country, Japan, because of the COVID-19 situation. Should the Olympics really take place? Or should they be canceled? In this article, I will cover two different perspectives: the individual perspective and a business/economics perspective.

Individual Perspective: First of all, what do people in Japan think about the Olympics?

In the background of such a result of the survey, from an individual perspective, there is almost no merit in the Olympics taking place this summer because simply, allowing all Olympics players from abroad means we have to expect more covid cases will occur in Tokyo. In addition, the IOC and JOC (Japanese Olympic Committee) have made rules that all players do not need to be quarantined for 2 weeks even though other foreigners who do not relate to the Olympics do. And, they also set a rule that players are allowed to bring, buy alcohol whenever they want to even though the Japanese Government prohibits stores from serving alcohol after 9 pm in Tokyo. Such “special treatments” increase the dissatisfaction of Japanese citizens. In Japan, just like other countries in the world, people try to spend time in their home as much as they can even though most of them want to travel or hang out with friends. In such circumstances, making special rules just for Olympics players make people think that this is unfair and feel disrespected.

On the other hand, from a business perspective, the Olympics can benefit not only a country but also some companies. The organizing committee announced that the economic effect of the Olympics can be estimated as 16,365,000,000 dollars. It means that if the Olympics are canceled, the amount of money will be lost in some ways. For the Japanese government, they spent large amounts of money to maintain places such as Japan National Stadium and Olympic Village because they thought all budgets they spent could be taken back by taking place the Olympics so that they certainly want to take place the Olympics no matter what. The Olympics also affect domestic companies a lot. The below graph shows what 4,092 companies will think if the Olympics is canceled. It shows that about 41% of them think that it is better to cancel the Olympics in terms of companies’ profits prediction. However, about 59% of them think that they will get more profit if the Olympics takes place. It means that about 60% of companies in Japan think that the Olympics will somehow benefit them even though foreigners will not visit Japan. Companies think this way because even though people from foreign countries are not able to come to Japan, the Olympics itself has a large impact on companies, especially hotels, restaurants, and airline companies because people take planes to come to Tokyo, eat meals at the restaurants, and then stay at the hotels.

The Olympics should be a sports festival that everyone in the world enjoys. However, because of the spread of the pandemic, people argue who is responsible if the Olympics do not succeed, not how to make the Olympics better. In the background, many Japanese people disagree with the opening of the Olympics mainly for two reasons.

On the other hand, many companies in Japan think that they are able to take advantage of the Olympics as a chance to gain their profits while some of them don’t consider the Olympics as a big opportunity due to the prohibition of foreigners to enter Japan. It is interesting to see the different reactions toward the Olympics between citizens, and companies due to their consideration from different perspectives. Anyhow, the Olympics will begin in about 3 weeks from now. I hope the Olympics will succeed without any problems related to coronavirus and give hope to those who have suffered from the virus…

What do you think? Let us know in the comments!