Governments are making an effort to reduce smoking by substantially increasing taxes on cigarettes. Taxes is a type of price control which has the responsibility to decrease the production and consumption of goods. A tax would be shown on a market diagram through a leftward shift of the supply curve. This indicates that the quantity supplied would decrease and would create a new equilibrium with the same demand curve at a new point where the price would be higher and both quantity supplied and demanded would be lower. The increase in price is explained as taxes are placed on the factors of production, which increases the cost of production. This in turn decreases the quantity that can be supplied at a limited cost. Therefore, an increase in price would be due to an increase in the cost of production to supply the goods, in this example, tobacco.

However, it is important to note that Tobacco is assumed to have an inelastic demand. As mentioned before, this is because tobacco is addictive and consumers, especially those with a high income, would choose to purchase similar amounts of tobacco even if the price increased. However, there still would be a responsiveness, as low income consumers’ ability to purchase tobacco decreases as tobacco now makes up a higher percentage of their income. Therefore, the responsiveness of quantity demanded would change, but it stays significantly low compared to the change in price.

Tobacco as a Demerit Good

Additionally, tobacco is a demerit good. A demerit good is a good or service whose consumption is considered unhealthy, degrading, or otherwise socially undesirable due to the perceived negative effects on the consumers themselves. Most demerit goods are addictive goods, and therefore, tend  to have an inelastic demand. This means that if the price increases, the quantity demanded would decrease by a lower rate — only a very small percentage of consumers would choose to no longer buy the good. These people would likely be those who are no longer able to afford the good after the price increased (low income consumers).

Tobacco having an inelastic demand displays why the government’s efforts of reducing smoking would not be effective. This is because a good with an inelastic demand would only increase the profit that suppliers receive, and the consumers would pay more because the quantity demanded would go down by a small percentage only. And therefore, placing a tax on a good with an inelastic demand would not be effective and would not reduce smoking, causing the government’s goal to not be achieved.  Alternative measures that would rather be more effective would possibly include education campaigns. A lot of people who buy cigarettes do not understand the harmful impacts of the demerit good. If people understand the effect it holds on a human body, there may be a greater change in the quantity demanded of tobacco than a change in price would. Additionally, governments should possibly promote the use of alternatives by subsidizing them, such as nicotine patches or electronic vapes. These alternatives could help consumers reduce their dependence/addiction on/of the demerit goods. This overall would be a more effective way governments could possibly best reduce smoking.

Taxes are a compulsory financial charge or some other type of levy imposed on a taxpayer by a governmental organization in order to fund government spending and various public expenditures. Taxes can be both indirect and direct.  A direct tax is one that the taxpayer pays directly to the government. These taxes cannot be shifted to any other person or group. An indirect tax is one that can be passed on or shifted to another person or group by the person or business that owes the tax.

Taxes are placed on the price of a good or service, which leads the consumer to pay more for the good/service. Therefore, the imposition of a tax leads to an increase in the price of a good or service, making it look less attractive to consumers. Moreover, the introduction of taxes also impacts producers, as these taxes are also placed on the factors of production that are used to supply these goods and services. This would eventually increase the cost of production for firms, leading to a decrease in quantity supplied. As a whole, the introduction of a tax on a good/service would increase the market price and decrease the market quantity. As seen in figure 1, the increase in cost of production, led to a decrease in quantity supplied. This is shown through a leftward shift in the market diagram. With the leftward shift from SS to S1S1 we can see that the price increases from Pe1 to Pe2, whereas the quantity decreases from Qe1 to Qe2. 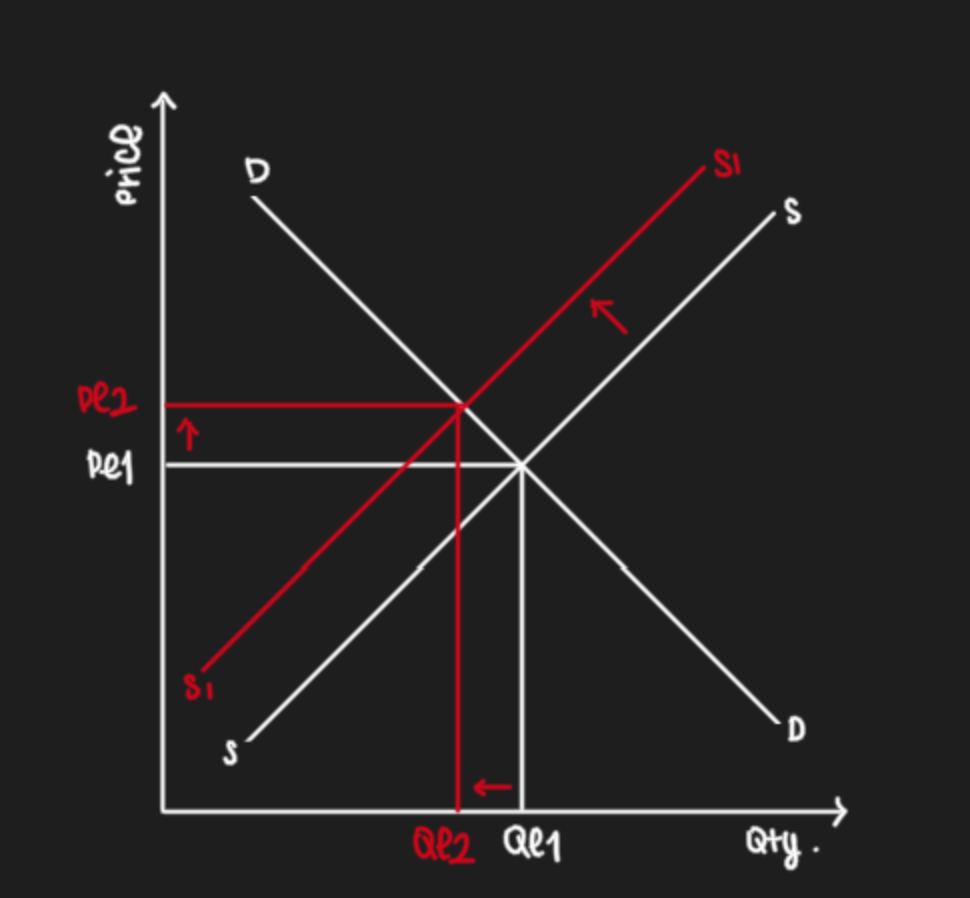 Subsidies are a form of financial aid or support extended to an economic sector, generally with the aim of promoting economic and social policy. It can also be done to ensure that a firm stays in business and to protect jobs as a whole. A subsidy is an amount of money that governments give to encourage producers and consumers to consume or produce a good or service. The amount of money is used to increase the price producers receive, while reducing the price a consumer pays for the product. Therefore, with a decrease in the price, the goods or service would look more attractive to a consumer. And with the money that producers have received they can use it to produce more goods or services. As a whole, the introduction of a subsidy would decrease the market price and increase the market quantity. As seen in figure 2, the subsidies lead to an increase in quantity supplied, which is shown through a rightward shift in the market diagram. With the rightward shift from SS to S1S1 we can see that the price decreases from Pe1 to Pe2, whereas the quantity increases from Qe1 to Qe2. 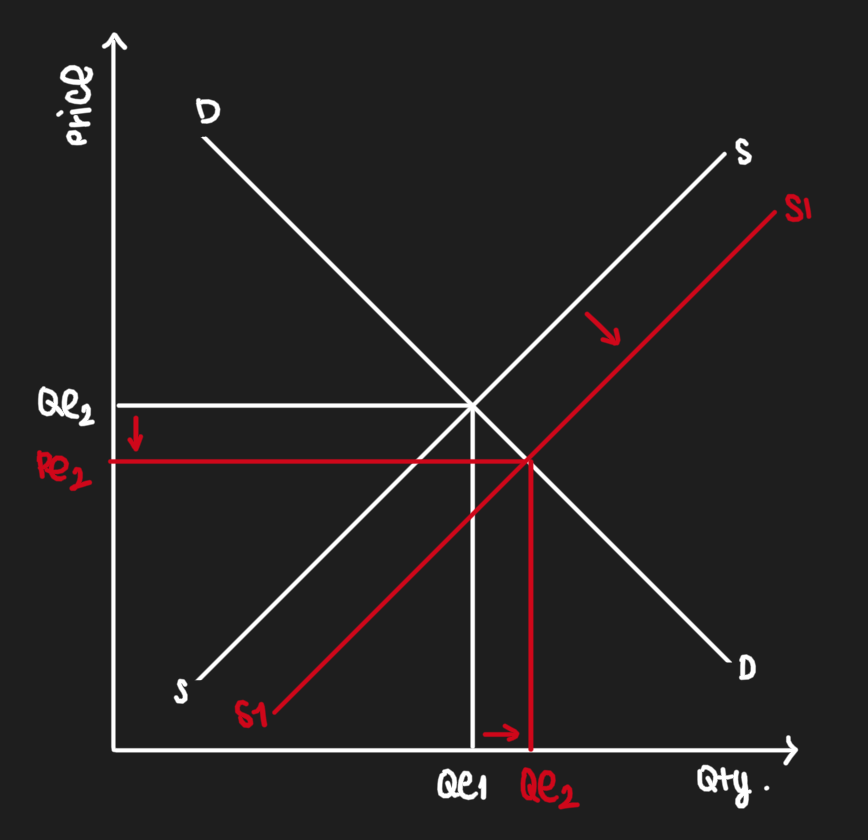